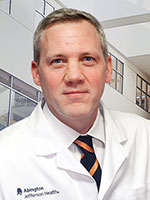 Dr. Kolff is Clerkship Director, Medical Student Education in Surgery at Abington Memorial Hospital and Clinical Assistant Professor of Surgery at Drexel University College of Medicine, and has recently been listed in Philadelphia Magazine Top Doctors for several years. His areas of special surgical interest include:

Jeffrey W. Kolff, M.D. is a board certified general surgeon and a fellow of the American College of Surgeons with more than 14 years experience in private practice. While a general surgery resident at Pennsylvania Hospital, Dr. Kolff received the Ronald Savarese Award for Excellence in Surgical Research for three consecutive years (2002 - 2004), as well as the Excellence in Scientific Research Award at the Thomas Bond Symposia for 2003 and 2004. He has recently been listed in Philadelphia Magazine Top Doctors.

Dr. Kolff has been the author/co-author of several studies published in peer reviewed journal, including the Annals of Surgery, Annals of Thoracic and Cariovascular Surgery, and the Annals of Thoracic Surgery . He also contributed a chapter on symptomatic splenolmegaly to the textbook Clinical Scenarios in Surgical Oncology . He is a Fellow of the American College of Surgeons and The Philadelphia Academy of Physicians and Surgeons. He is a member of the American Medical Association, the Society of American Gastrointestinal Endoscopic Surgeons (SAGES), and past President and now Governor at Large of The Philadelphia Metro Philadelphia Chapter of the American College of Surgeons.