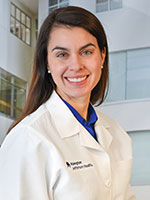 She has made several presentations at medical meetings and symposiums. Most recently she presented at the Eastern Vascular Society Annual Meeting in September 2016.